Another Adventure for the Highwayman Last Weekend

Recently forced to hide in Skipton Castle while a hue and cry was raised in the town, the famous Yorkshire highwayman ‘Swift Nicks’ Nevison faced an unexpected danger. This took the form of a brave young lad, armed only with a wooden sword, who thought to test the highwayman’s mettle by challenging him to a duel. Being a courageous sort of gentleman, and having encountered many a threat in his time, from foreign mercenaries to parish constables, Nevison was undeterred and stood his ground. Soon, however, the potential combatants developed a mutual respect, both good fellows and knowing the other to be the same. Before long the little lad was trying out Nevison’s sword to see how it compared with his own toy blade, and singing its praises as a well balanced blade.

I have just returned from the Seventeenth Century Life and Times event at Tutbury Castle in Staffordshire. There I played Lieutenant Colonel Peter Kniverton, the governor, defending the castle against the soldiers of Sir William Brereton, rebellious roundheads all.

It went well, apart from a certain duel. I was catching my breath just after we had been hard pressed by an assault … … when I noticed one fellow, Captain Henry Vernon, heading my way with evil intent. Being of considerably more experience with a blade than me (not exactly a rare occurrence) he had cut me before I could defend myself. I stumbled back away from him … I am now recovered with little more than my pride hurt, and ready to go and defend Skipton Castle this weekend. This time I shall have my musket with me so hopefully I can deal with the foe before he get’s so close!

School holidays can’t half be dangerous, you know. 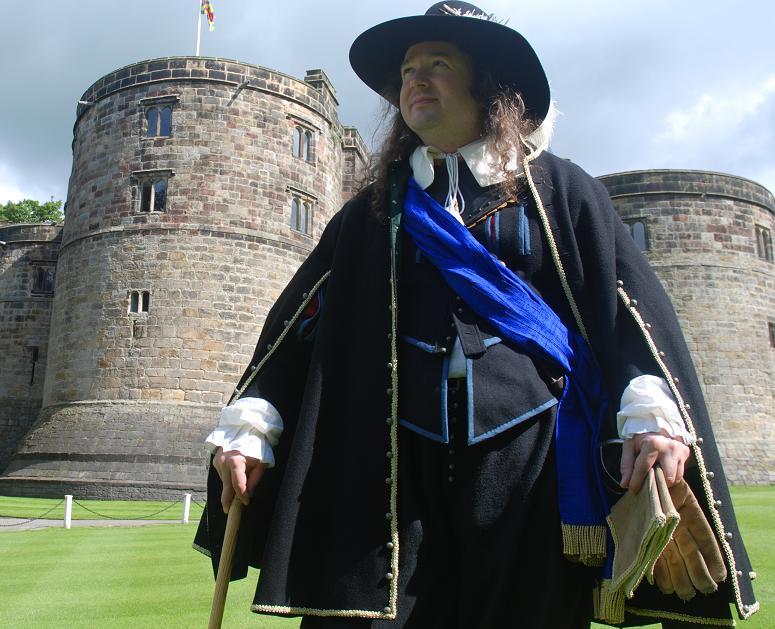 “A fabulous day for staff and children! It has provided a great stimuli for writing for children of all age groups.”