A Complete Cavalier is a Child of Honour …

“… A gentleman well born and bred: that loves his king for conscience sake. Of a clearer countenance and a bolder look than other men, because of a more loyal heart.” 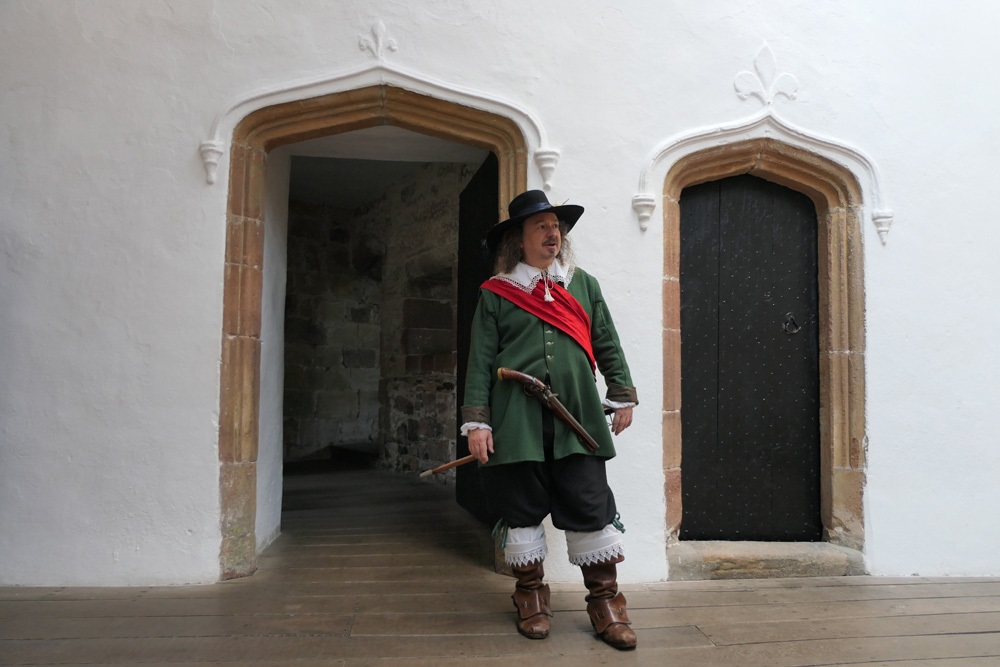 (Hopefully, you are more convinced now you have seen the picture!)

Last weekend my August events at Skipton came to a close when once again Colonel Sir John Mallory was busy commanding the (unseen) garrison during the time of the castle’s close siege in August 1645. He had a great time, talking to grown ups and children, sometimes families, sometimes a gathered crowd filling every bench in the room and others standing beside! Let’s face it, despite all the concerns of the war weighing heavy upon him, he looks happy here … 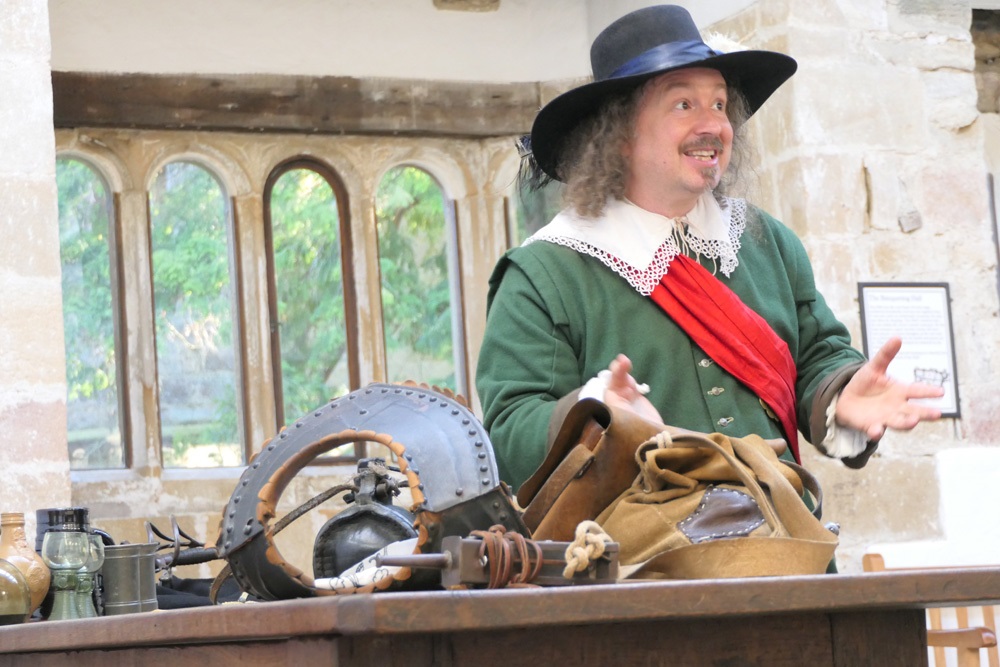 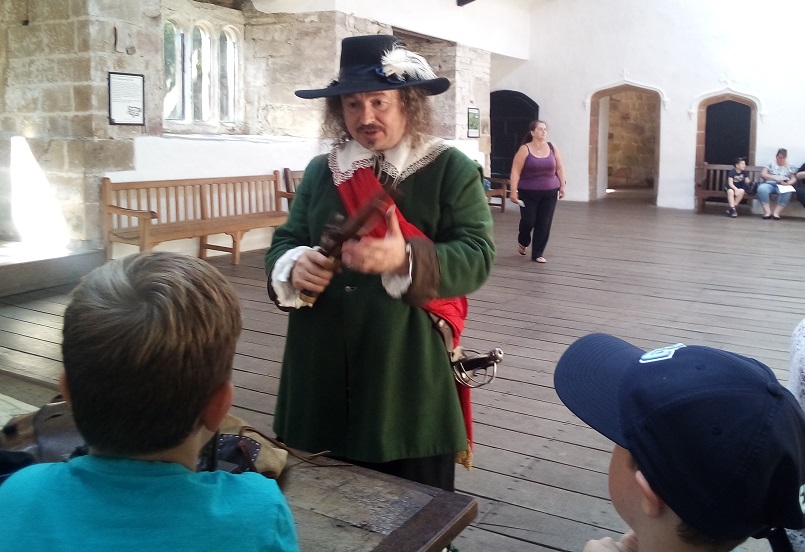 … and showed other children which other castles in the great country of Yorkshire were still holding out for the king. 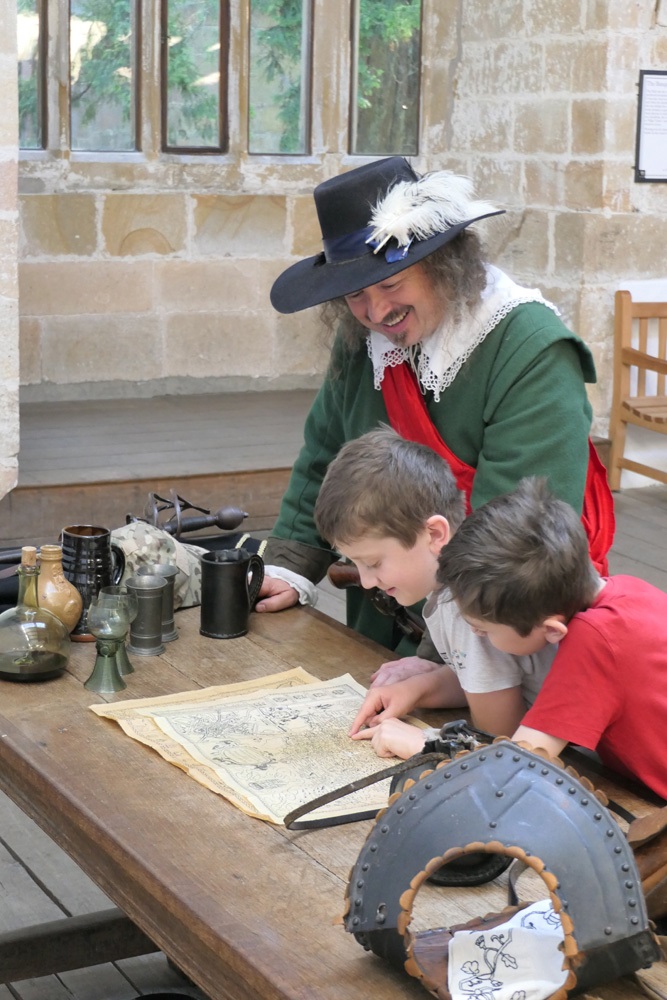 When he asked one group of grown ups where they came from so that he could tell them what he had heard about the war there, they said they were from Greece! After talking about a few foreign mercenaries serving in the war, including the infamous Croatian ‘turncoat’ Carlo Fantom, he discovered the four of them now lived in Leeds, about which the governor had a veritable cornucopia of war stories! 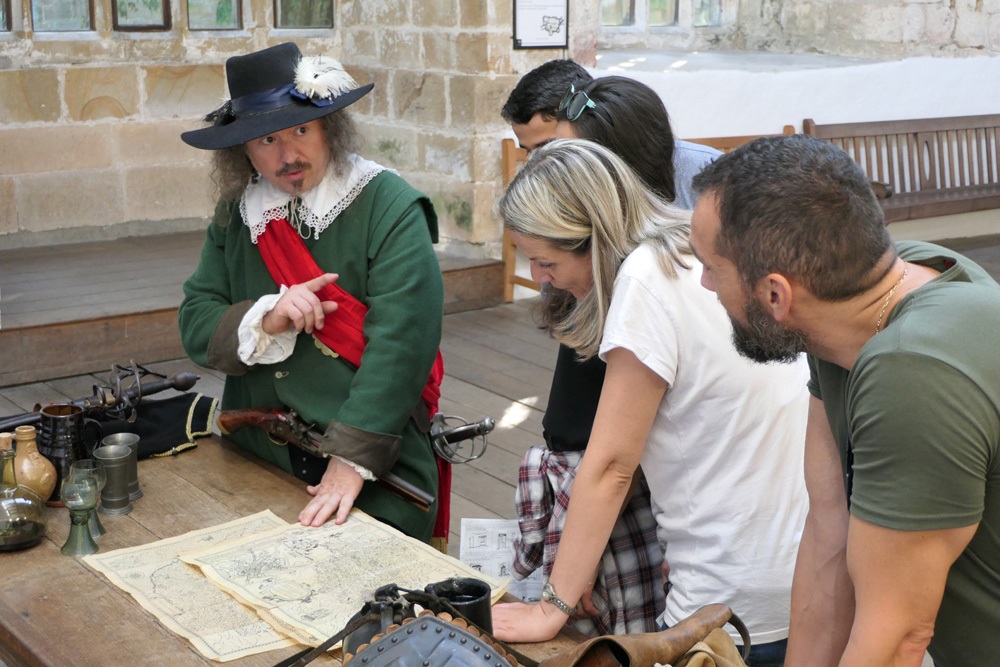 Afterwards, they said Leeds can indeed get a bit rough on a Saturday night!

With most folk, and despite the sad condition of the king’s affairs in England, he still found something to laugh about. 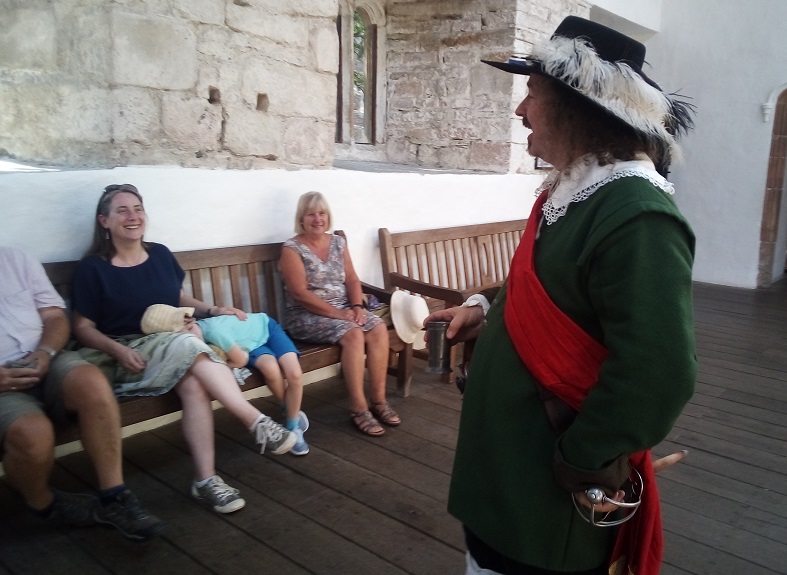 As of next week I am back to visiting schools. The beard will go, to be replaced with another by the time of my Guy Fawkes’ visits, and I will also begin flipping between characters once again. I can’t wait!

If you are considering a visit from one of my historical characters to your school, then please take a look at my page of Characters. 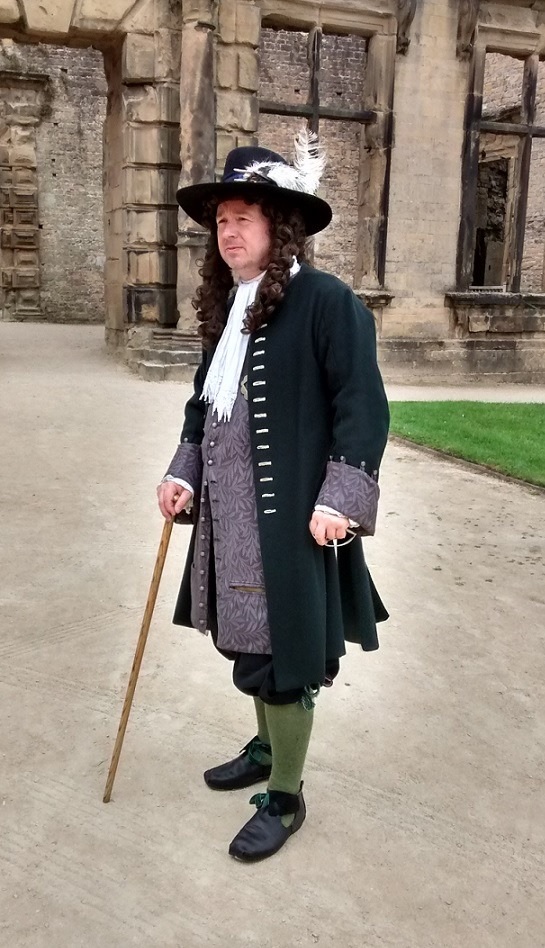 On the Right Side of the Law

A couple of weekends ago I played the part of a petty constable from the parish of Birstall at a Queen’s Regiment event at Oakwell Hall. The year was 1715 and the Tory rebels and Jacobites were threatening to cause turmoil in the kingdom. Thus it was that my constable found himself having to find lodging and victuals for the company of soldiers ordered to assist in the keeping of the peace in the parish.

Here he has found a suitable alehouse for several soldiers, and they sit patiently awaiting some ale to quench their thirst. 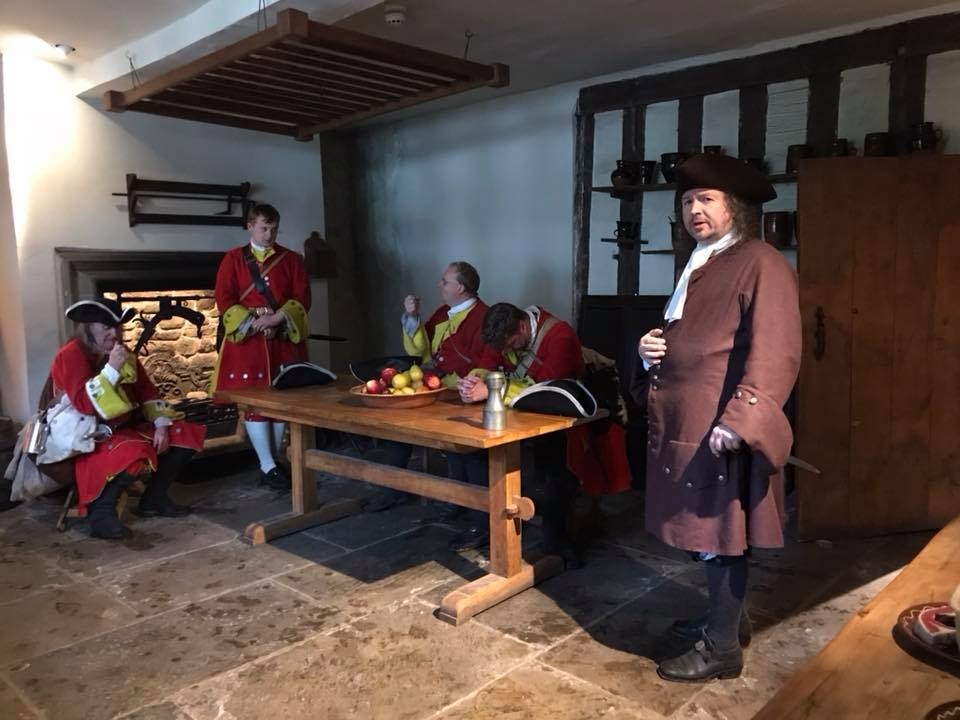 (Thank you to Becks Knight for this photograph.)

Of course it is one of a constable’s duties to keep His Majesties Peace and so I found myself delivering some advice to the visitors concerning their behaviour, warning them about the consequences should I be forced to read the brand new ‘Riot Act’. 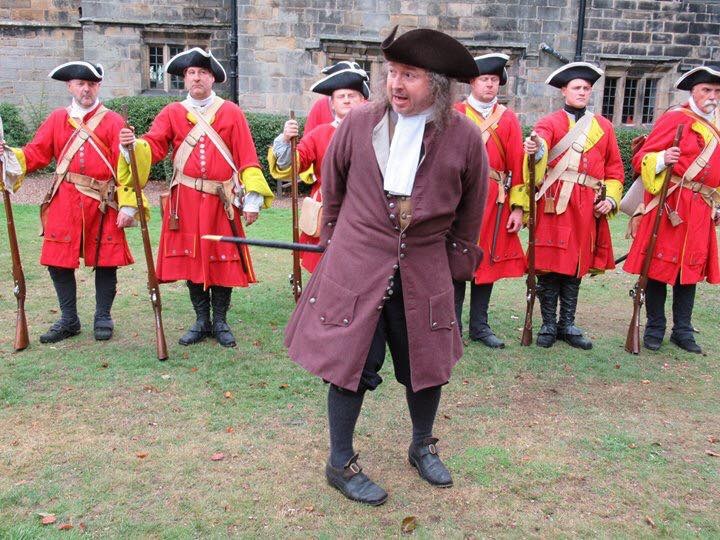 (Thank you to Kate McFarlane for both the photo above and the one below!)

I like to think that I acquitted myself well, despite the fact that I was wearing the hat, shoes and coat of my 1720 pirate character, Captain Burwash! If you want to know more about Captain Burwash, please click here. And if you want him to visit your school, please get in touch. To see which of my other historical characters you might want to visit, please take a look at my page of Characters. I look forward to hearing from you.

(Although many folk argue that is three words!)

Once again this August the notorious highwayman John ‘Swift Nicks’ Nevison was forced to hide in Skipton Castle until he could make his getaway after dark. Luckily, the castle steward commonly frequents the town’s gaming tables and consequently owed Nevison a considerable sum of money – a debt the highwayman was willing to forget in return for protection. It is also a good thing that the Dowager Countess of Pembroke is so often at one of her other castles, for I doubt she would agree to such a notorious robber within her walls!

On Saturday Nevison had lots of company, allowing him to carouse throughout the day with all and sundry, boasting of his brave exploits and many cunning tricks. No-one pointed out, however, that whenever he removed his hat it left a strange line around his forehead! Still, better there than a similar line around his neck! 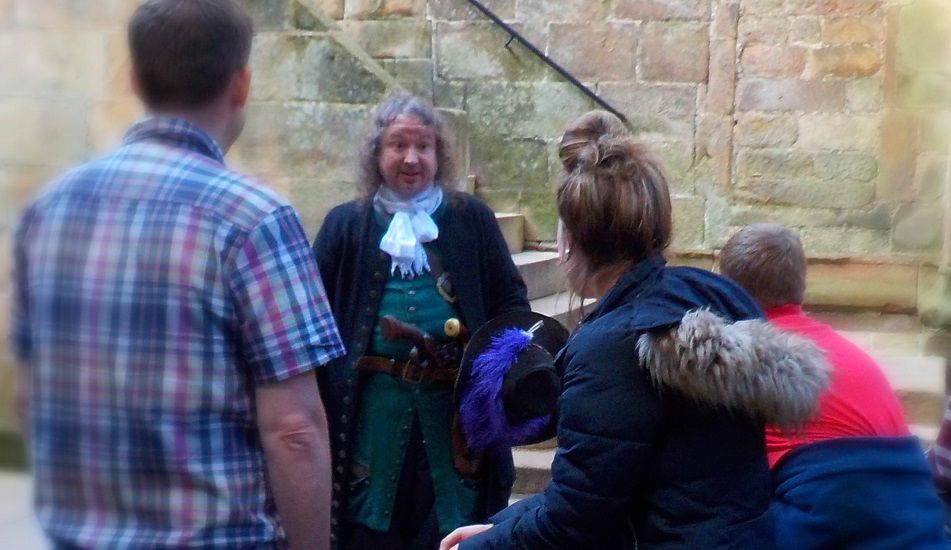 He met with a lot of children too, many of whom he reckoned would make good ‘land pirates’, being brave and good fellows all. Some of the people he met were so poor they could afford neither hats nor coats or even sleeves for their shirts! He reckoned that a spot of highway robbery could lift them very quickly from their miserable condition. 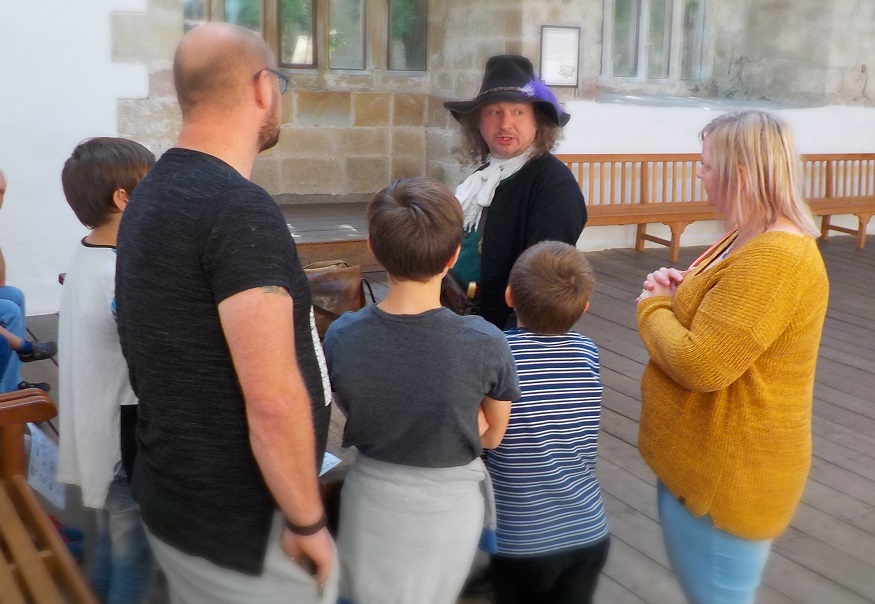 His own son visited on the first day, and the two of them played a strange trick in which both were there but one was not.

And at the end of the day it was hard to say farewell to the little chap, but Nevison had had so much fun he wanted to stay another day! 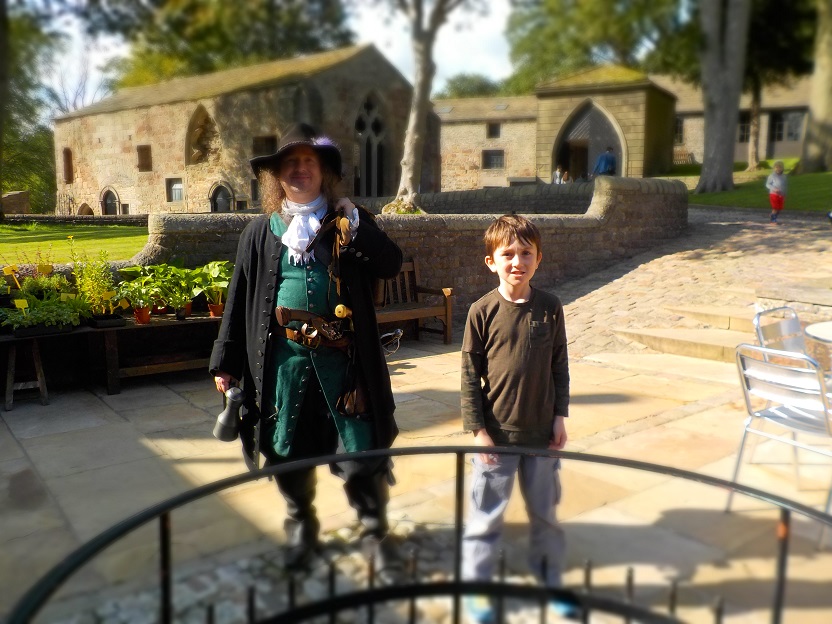 On Sunday it rained, which was lovely because huge crowds gathered in the Great Hall to hear his stories, and Nevison was able to correct all sorts of lies that had been written about him. All who visited now knew him to be a true gentleman of the road, like Robin Hood reborn, and knew to ignore the libelous stories printed about him in the news-sheets.

As the day came to an end I think the highwayman felt very good about himself, for although he knew full well he could hardly expect a long life (yet a very merry one), at least he would not be turning in his grave subsequently! Nevison already has plans to visit quite a number of schools over the next 12 months, but he is always on the look out for new places to hide for the day!

If you are interested in Nevison visiting your school, then please click on Swift Nicks Nevison to find out more about him. To see which of my other historical characters you might want to visit, please take a look at my page of Characters. I look forward to hearing from you.

These drawings were included in the thank you letters sent to me by the children of a Kirklees school Captain Burwash visited last month. I love receiving drawings like this, and thought I would share some of them with you.

Here you can see the Captain with the whole class. The artist, presumably the little one right next to him, is saying ‘Cool’, while the captain seems to be coughing!

In this one the captain is drawn in much greater detail, but I don’t like the way he appears to be robbing the child! 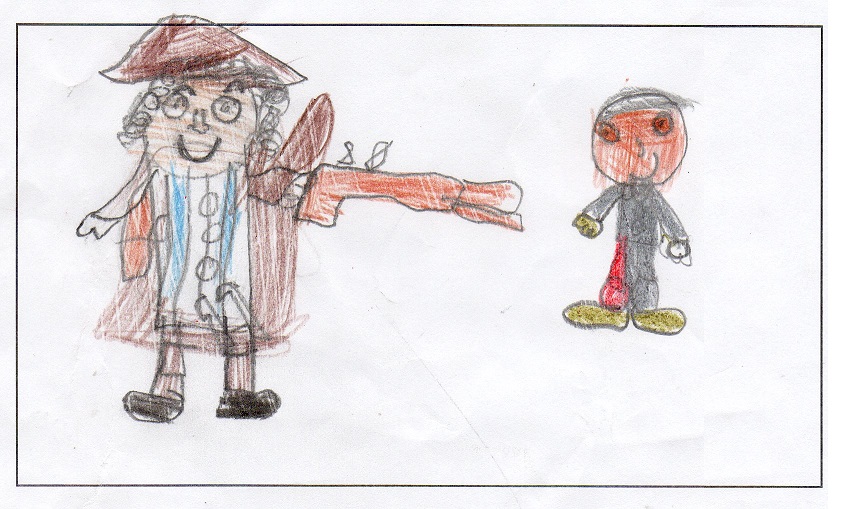 In this next one captain Burwash has removed his shoes, probably by necessity as his hands and feet have swollen considerably. He is still smiling though.

These two images are from two different children who may have been inspired by other pirates when drawing their own particular depictions.

Here the captain has apparently transmogrified into a nurse with what appears to be a caterpillar living inside her hat. 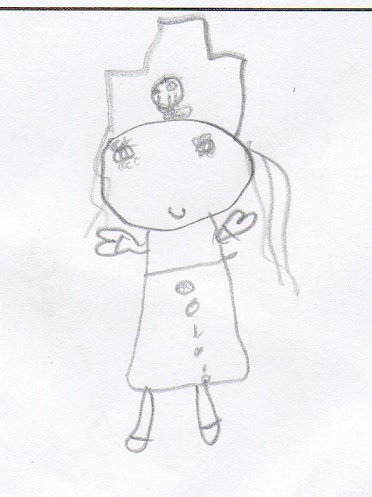 In this drawing it looks like the captain was visiting not the school but instead his family. There is a very clear familial likeness.

These two drawings could be before and after images. I don’t know what sort of scrape the captain got himself into but he does look angrier afterwards! 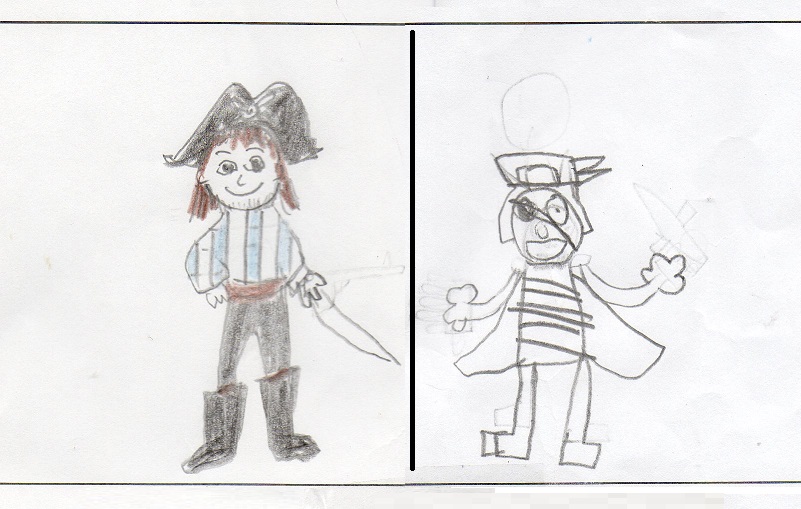 Here the captain and a friend appear to have gone on deck on a windy day. Not only have their hats blown away, but their hair is trying to follow! In this detailed drawing you can see many of Captain Burwash’s possessions – his tricorne, pistol, cannon ball, musket and what I think is a cuttle fish!

In the next drawing I am not sure which one is the captain, as I don’t recall him having either one leg missing of a pet parrot. Perhaps these are two of his crew? I this last one the captain seems to be setting a new fashion by wearing a little boat upon his head. I reckon it could catch on.

Thank you for the wonderful day yesterday. Had some fantastic literacy following it today in all three classes!